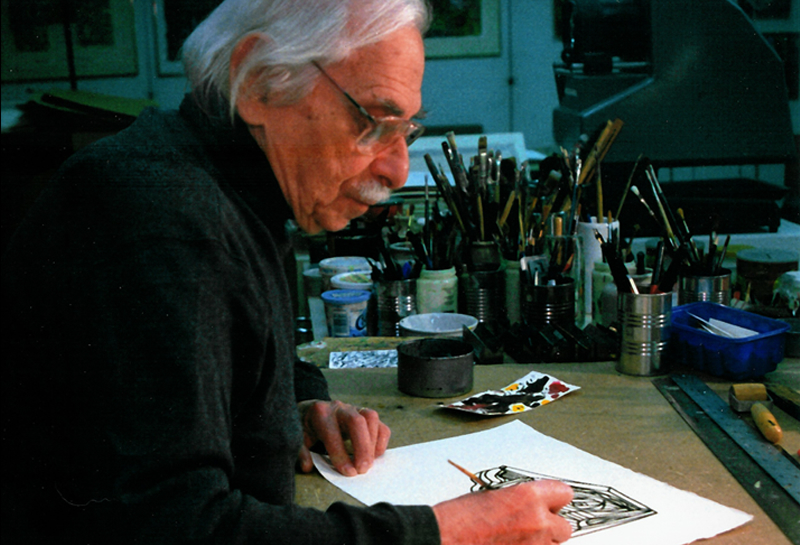 “My work feeds upon experiences lived in the physical world and those flights of the spirit that express themselves through the creative process. Much of my work comes out of numerous sketches and studies in search of a final image that I use fully, creating a series of variations on a theme which might recur transformed in later works. It is important to state that my early years spent in Venezuela were seminal in the development of my work. My Venezuelan memories have always been part of my vision. In spite of the many years spent in the USA, I am considered a Latin American, a Venezuelan painter.”

MARIUS SZNAJDERMAN (1926-2018) was born in Paris, France on July 18, 1926. In November of 1942 he escaped to Spain with his parents and moved to Venezuela where he lived until 1949. His early training as a painter and printmaker was at the School of Fine Arts in Caracas. His teachers were the painters Ramon Martin Durban, Ventrillon-Horber and Rafael Monasterios. In 1948 he was a founding member of the Taller Libre de Arte, an influential experimental workshop for the visual arts responsible for the introduction of contemporary trends in the Venezuelan art world. In Caracas he was active in art circles, exhibiting, illustrating and designing for the theater. His Venezuelan period had a seminal influence on his style, imagery and color.

Sznajderman moved to the United States in 1949 where he studied at Columbia University with scenic designer Woodman Thompson and printmaker Hans Mueller, ultimately receiving Bachelor of Science and Master of Fine Arts degrees from Columbia University. He served in the U.S. Army from 1953 to 1955 during the Korean Conflict. While serving, he worked in 1954 and 1955 as the Chief Artist-Illustrator at Red River Arsenal, Texarkana, TX. As a scenic designer he worked for Circle in the Square Theatre, the Felix Fibich Dance Company, the French Art Theatre, Columbia Theater Associates and summer stock. He has taught art, art history and design at New York University, the School of Visual Arts, Fairleigh Dickinson University and the Ridgewood School of Art in New Jersey. He also taught experimental art programs in New Jersey public schools under state and federal grants. In 1958 and early 1959, he traveled with is wife, Suzanne, to Mexico, staying in Cuernavaca, where he painted, did illustrations and a series of woodcuts on Mexican subject matter. This Mexican trip was influential in his later work.

In 1959 he did a series of woodcuts on the Concentration Camps (now in the collection of Yad Vashem, Jerusalem, Israel). In the early 1960’s he started working on a mural project on the Revolt of the Warsaw Ghetto. This material was exhibited at YMHA’s in Hackensack, NJ, Newark, NJ, Baltimore, MD, and Houston, TX. In the summers of 1960 and 1967, he taught at Indian Hill, a music and art school, Stockbridge, MA. In the early 1960’s he was a founding member of the Modern Artists Guild of New Jersey. From 1970 to 1973 he was the delegate to the USA of the National Institute of Culture and Fine Arts of Venezuela (INCIBA). From 1974 to 1983 he directed Galeria Venezuela in New York City for the National Council of Culture and Fine Arts of Venezuela (CONAC). From 1980 to 1986 he coordinated part of the international editions of prints for AGPA (Actualidad Grafica Panamericana), a Latin American Container Corporation of America and Smurfit Carton of Venezuela project. In 1989, Sznajderman illustrated Magicismos, a book of poems by the Venezuelan poet Enrique Hernandez D’Jesus. In 1992, he illustrated Who Were The Pre-Colombians, by Bernard Barken Kaufman. In 2005, Venezuelan poet Hugo Brett Figueroa published a book titled Scargot with illustrations by Sznajderman. In 2000, he worked on a project for a book of drawings based on a series of sketchbooks from the 1950’s.

In 1989, Sznajderman designed a brass holocaust monument for Temple Beth El, Hackensack, New Jersey. Recent projects include a series of print-collages using material from incomplete editions of serigraphs from the 1960s. In 2009 and 2010 he worked on a series of collages and a collage construction dealing with the Vichy Government and the Holocaust in France. In 2011 and 2012 he executed a large collage construction and a series of collages on paper (The Yanaka Series) using Chiyogami Traditional Japanese printed paper brought back from Japan by his son, Michael, in 1990.

In 2011, Sznajderman completed a series of seven collages, The Dali Series. In 2013, they were reproduced in a book entitled Dali, Dumas and Me, An Artist’s Tale of Friendship and Deception, published by Matomi Press, Amherst, MA. In 2013, The Dali Series was exhibited as part of a one-man show for the benefit of World Lung Foundation at Chashama Gallery Space in Manhattan.

He has had more than thirty one-person exhibits and numerous group shows in South America and in the U.S. His work is in major public collections, among them the Smithsonian Institution and the Library of Congress, Washington, DC, the Fine Arts Museum and the Museum of Contemporary Arts, Caracas, Venezuela, the Cincinnati Museum of Art, the Museum of Modern Art and the Museo del Barrio, New York City, the New Jersey State Museum, Trenton. In 1991, The Museum of Contemporary Art of Caracas gave him a major retrospective exhibit. In 2005-2006 he exhibited a series of collages and collage constructions using Yiddish as a leit motif at the National Yiddish Book Center, Amherst, Massachusetts. In 2007 he exhibited his Warsaw Ghetto Revolt mural project and concentration camps woodcut series created between 1958 and 1959 at the Puffin Forum in Teaneck, NJ.

In 2015 Sznajderman moved to Amherst, Massachusetts with his wife, Suzanne, where he continued to produce and exhibit his work until his death on February 24, 2018.

He is listed in Who’s Who in American Art, and in Printworld International, as well as in many other publications (see resume for partial listing).